What is often forgotten in the call to roll out tests for COVID-19 is the major health hazard it may pose for everyone involved in the process. This is because of the highly contagious nature of SARS-CoV-2, the virus that causes the disease, and ease with which it can be transmitted between people. The virus can survive for a few hours or a few days, depending what surface it lands on.

Performing a test not only poses a potential danger to healthcare professionals on the frontline taking a sample from a potentially infected person. It can also be a threat to the many people behind the scenes whose work is hidden from public view. This includes those who transport the sample to the laboratory and process it in the laboratory to obtain the result. Getting a test done is by its nature a complex process that needs careful planning all along the way to make sure everyone in the chain does not get infected with SARS-CoV-2.

Not since the outbreak of Spanish Influenza, in 1918, has the world been faced with such a testing challenge on this scale. Until now, most public health systems, with the exception of countries that confronted Ebola or West Nile Viruses, have had little experience developing tests at scale for such a deadly infectious agent. Most of the current pandemic testing protocols to hand in the West have been developed for seasonal flu.These are inadequate for dealing with such a highly pathogenic virus as SARS-CoV-2COVID-19. Consequently, many scientists around the world are now rapidly developing new laboratory protocols and procedures to safely manage the new virus.

Laboratories have a long history of taking measures, known as biocontainment, to minimise the risk of working with infectious agents. One of the first people to realise the importance of biocontainment was Robert Koch (1843-1910), a German physician and microbiologist who discovered the bacteria that cause tuberculosis and anthrax. Based on his hypothesis that bacteria could move through air, he built a special cabinet to be able to conduct his experiments more safely. His cabinet comprised a glazed table top box with two openings that were fitted with oilcloth sleeves for the user’s arms. Koch’s prototype inspired others to develop and install their own homemade biosafety cabinets in bacteriological laboratories elsewhere (Berlinger). 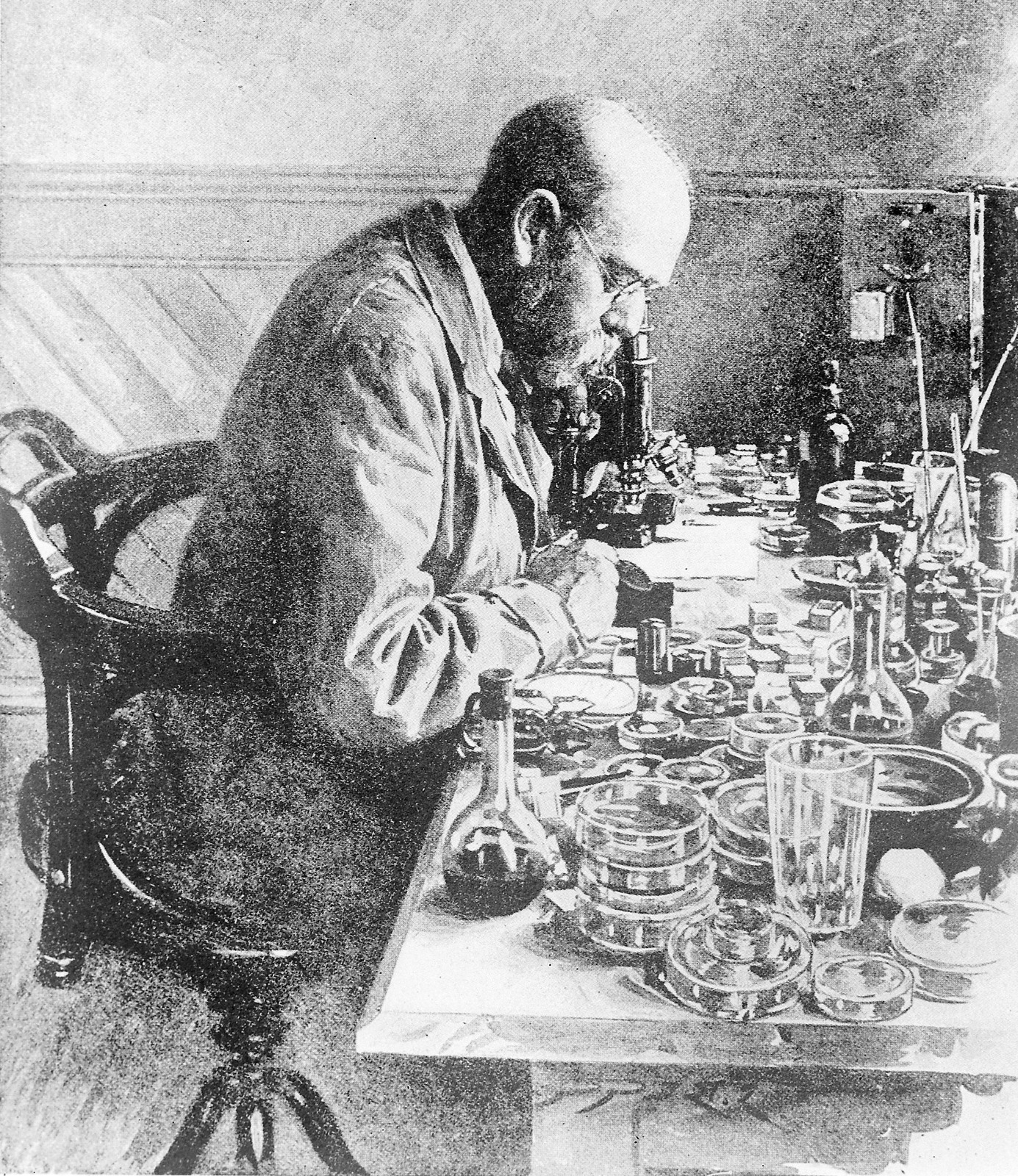 Robert H Koch working in his laboratory, credit: Wellcome Images. Koch won the Nobel Prize in Medicine in 1905 for his discovery of the tubercle bacillus in 1882, a bacterium that causes tuberculosis. The disease was responsible for approximately 15% of all deaths in the European population in the 19th century.

For many years biosafety cabinets offered little protection to laboratory workers. In part, this was because the early cabinets did not sufficiently contain aerosols and were poor at decontaminating exhausted air. This inevitably led to infectious agents leaking out of the cabinet, which even in small quantities could be lethal. The first report of a laboratory acquired infection was reported in Germany in 1893. It resulted from an accidental inoculation with tetanus. Laboratory acquired infections remained a common hazard for laboratory workers throughout the early twentieth century. It was only in the mid-1950s that some of the cabinet’s design flaws began to be resolved, which led to a decline in the incidence of laboratory induced infections (Berlinger; Kruse, Puckett, Richardson).

Working as a biomedical research worker continued to be one of the most dangerous jobs in the health service well into the 1960s. Many had a life expectancy of about 35 years. This was due to their high exposure to pathogens. It was not uncommon for laboratory workers to splash infectious materials into their faces or eyes. Another way to acquire infections was as a result of accidents when manipulating inoculating needles, pipettes, syringes, centrifuges, lyophilised ampoules and blenders. An additional hazard were the chemicals used. Between 1930 and 1965 the United States documented 1,760 cases of laboratory infection cases(Wedum; Pike, Sulkin, Schulze).

The situation began to change from the 1970s as a result of improvements made to laboratory containment equipment. A number of government laws and regulations were also put into place internationally to maximise the safety of humans working with dangerous microorganisms and to prevent their escape into the wider environment. It is now commonplace for laboratories to use closed vessels, personal protective equipment (e.g. gloves or full bodysuits) and additional equipment (biosafety cabinets, enclosed centrifuge containers, or pipetting aids) to physically separate the laboratory worker from the biohazardous agent. All biocontainment laboratories also have supplementary containment measures to prevent an infectious agent escaping beyond its perimeter. This includes strictly controlled access zones, interlocked doors and special engineering and facility design features like dedicated air handling systems with filters, showers and autoclaves. In addition, all personnel are required to undergo special training (Kimman, Smit, Klein).

The World Health Organisation (WHO) has now established a classification system for microorganisms based on the danger they pose to laboratory staff and the general public. Those that fall into risk group 1 are biological agents unlikely to cause disease in humans. Risk 2 covers microorganisms that are potentially hazardous to laboratory workers that are unlikely to spread among them or the wider population and can be effectively prevented and treated. More dangerous biological agents that can cause serious human disease and pose major danger to workers and risk being spread to the wider community are classified as risk 3. Risk 4 is the final category. This group includes microbes associated with severe illnesses in humans that are a grave threat to workers, have a high chance of spreading to the community and for which there is usually no effective prophylaxis or treatment (Coelho, Diez). 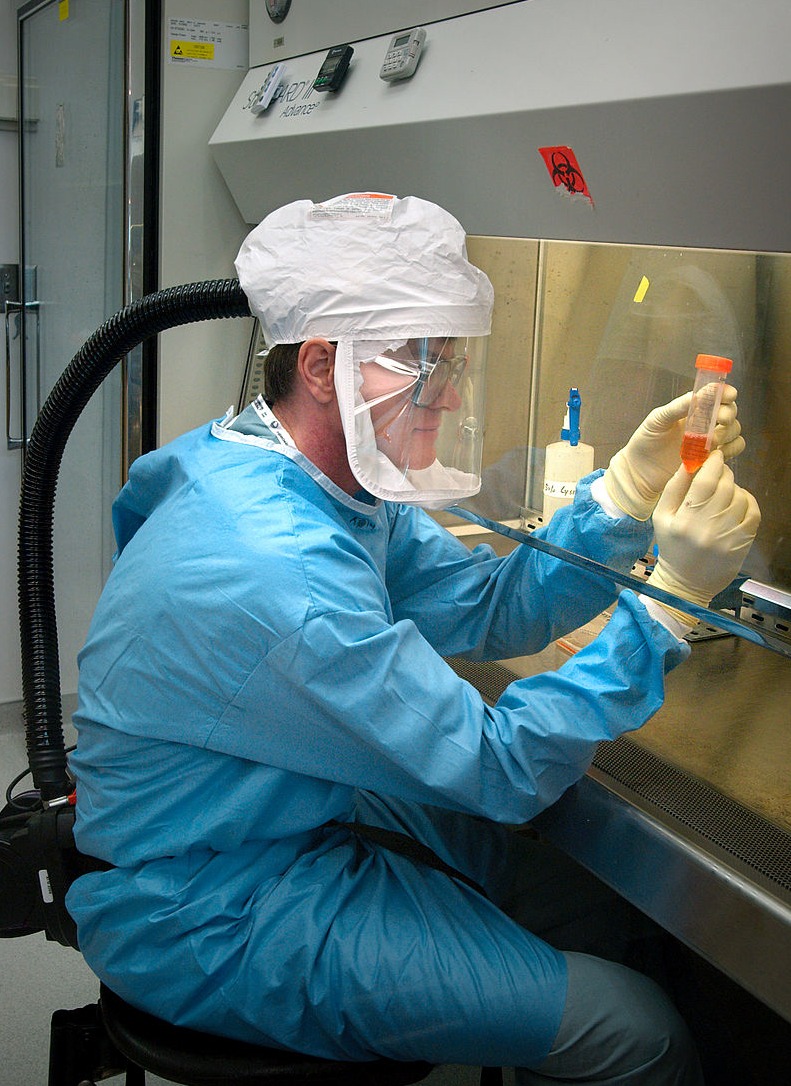 In the case of SARS-CoV-2 only very strict high containment laboratories are allowed to handle this virus. Known as biosafety level 3 (BSL-3), these laboratories need to be airtight and have airlocks with an unidirectional airflow that ensures any potentially contaminated air is retained inside (Kimman). In the United Kingdom, such places are called Containment Level 3 laboratories (CL3). Yet the number of these laboratories is limited; there were approximately 600 CL3 laboratories in the UK in 2012. Half of these were located in universities and the other half in research institutes. There were also another 75 operated by private laboratories (Davison, Lentzos).

With diagnostic services in all countries now being stretched to the limit by the COVID-19 pandemic, various laboratories with less stringent containment procedures are investigating how to establish testing for SARS-CoV2. This includes laboratories based in universities and research institutes. The advantage of such places is that, unlike remote centralised testing laboratories, they tend to have closer proximity to healthcare facilities where staff need to be tested. This makes the logistics of transferring samples simpler and quicker, thereby reducing turnaround time.

One of the key steps to enabling non-CL3 laboratories to carry out COVID-19 testing is the ability to deactivate the SARS-CoV2 virus in samples taken from potentially infected individuals. This is important right from the moment when a sample is taken at the point of care through to when it is shipped and then processed in the laboratory. Traditionally all patient swabs are placed in a collection tube for transport to the laboratory to be tested. Each tube contains a specially formulated liquid, known as viral transportation media, to ensure the sample remains viable until tested. Various transport media protocols have been developed over the years to meet the requirement of health services. Few, however, provide a means to inactivate a virus like SARS-CoV2.

The best protocols available for handling the new virus when it emerged were those devised for Ebola, which, like SARS-CoV2, is a RNA virus. These recommended the use of a chemical solution, composed of guanidine salts (guanidine thiocyanate, guanidine isothiocyanate) which was discovered to render the virus harmless but maintain its RNA structure which is important for its detection in diagnostic tests (WHO; Haddock, Feldmann, Feldmann).

A number of companies and research laboratories are now in the process of adapting the viral transportation media methods developed with Ebola for use with SARS-Cov2 (Maytum, Murray). Among those in the front line of this process are a group led by Stephen Baker at Cambridge University and another led by Robin Maytum at the University of Bedford working together with Jenny Murray and the Life Science Group Limited, a company that specialises in the supply of essential scientific reagents. By coincidence both teams have devised similar protocols which have now been validated by Public Health England. In both cases the teams have devised a means to deactivate the virus in a sample at the point when it is taken. Such work provides an essential step to the expansion of the number of laboratories that can start performing diagnostic tests. It is a critical key to guaranteeing the safety of the handling and transportation of patient samples and for laboratories not designed to handle a highly pathogenic virus like SARS-CoV2. 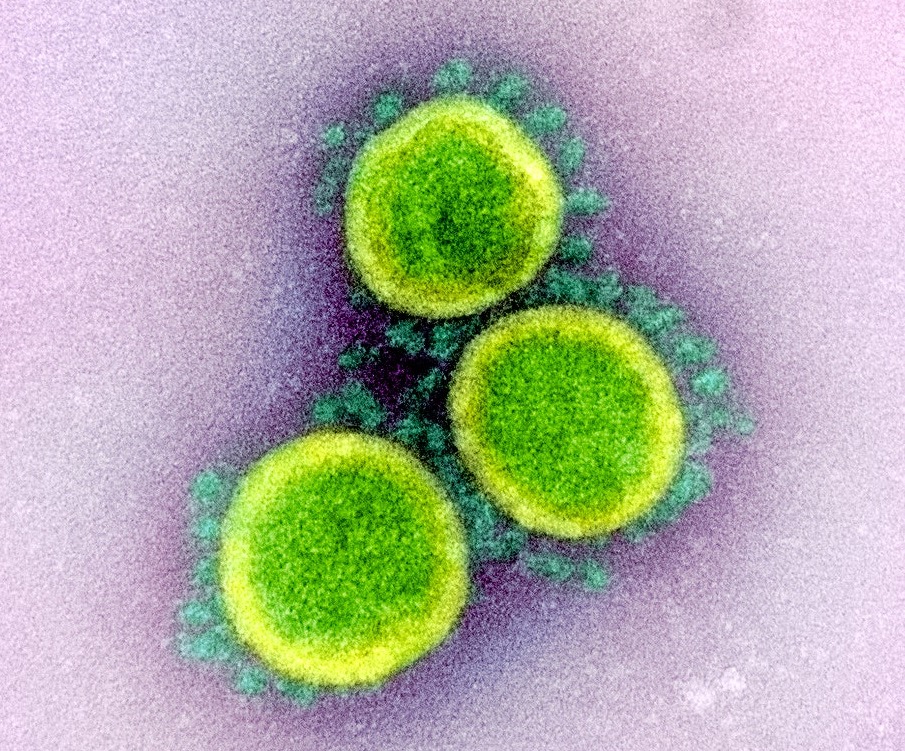 SARS-CoV2 as seen under an electron microscope

This article was inspired by my conversations with Stephen Baker and Jenny Murray. Their comments were also very helpful in the preparation of the article.

Berlinger, NT (2003) ‘Why there hasn’t been an anthrax outbreak’, Invention and Technology, 18/3 , https://www.inventionandtech.com/content/why-there-hasn%E2%80%99t-been-anthrax-outbreak-0.Back

WHO (2014), ‘General procedures for inactivation of potentially infectious samples with Ebola virus and other highly pathogenic viral agents’, https://www.paho.org/hq/dmdocuments/2014/2014-cha-procedures-inactivation-ebola.pdf.Back