Continuing investment in other drugs and manufacturing

In addition to conducting further clinical trials for Adcetris, SGEN has continued to invest in research (figure 11). By 2015 the company’s research expenditure had risen to $376 million. This was up 64% from the year before (James). Much of this research has been directed towards the development of new cell-killing agents, including auristatins which help to inhibit the action of microtubules. These are microscopic tubular structures that are present in the cytoplasm of cells (A/R, 2012, p.2). SGEN also invested in the development of its own proprietary sugar-engineered antibody (SEA) technology to produce non-fucosylated engineered mAbs which can enhance the antibody-effector function and thus its potency. 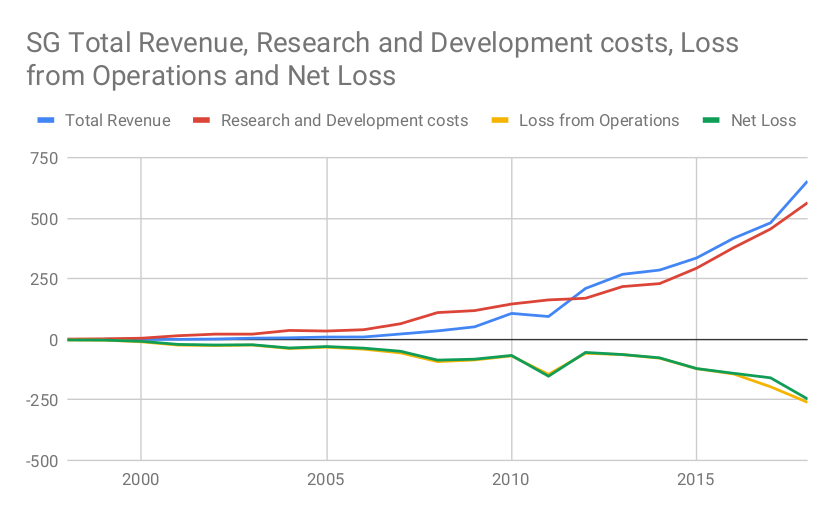 Such work has been done alongside continuing to launch clinical trials for promising new drug candidates. Appendix 1 lists the different drugs that SGEN has taken through various stages of clinical trials over the years and types of cancers they have been tested against. By the time that Adcetris gained its first approved, SGEN had four clinical stage ADC programmes and several preclinical product candidates in development. Appendix 2 provides an overview of three key drugs SGEN has in its pipeline.

The overall investment SGEN has dedicated to research and development as well as clinical trials has meant that the company has continued to operate at a loss despite the revenue beginning to flow in from Adcetris (figures 10 and 11). Not all of these recent ventures have proven successful. In the summer of 2017 SGEN was forced to halt all of the clinical testing of vadastuximab talirine (SGN-33A) after it saw a higher rate of patient deaths with the drug in a phase III trial conducted among frontline older acute myeloid leukaemia patients. Developed internally SGN-33A contains an anti-CD33 antibody that is linked to two PBD dimers. Overall the company had invested just over $125 million in the drug’s development and testing between 2012 and 2017 (A/R 2017, p.1; Adams, Fierce Biotech). 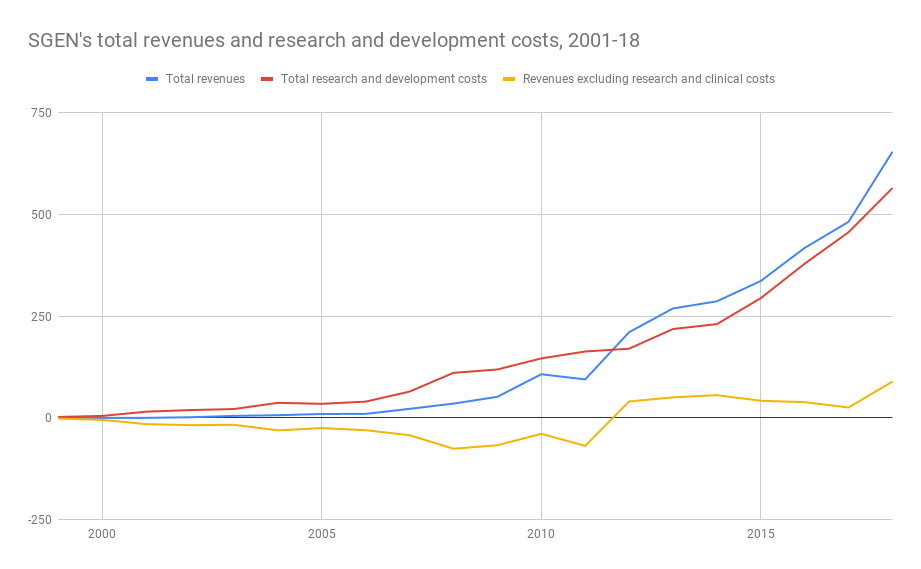 Other drugs in pipeline elsewhere

While SGEN is waiting to hear the outcome of its various drugs, polatuzumab vedotin was recently granted FDA approval. This is an ADC drug that Genentech, a member of the Roche group, developed with the help of a license it took out on SGEN's ADC technology. The drug, trade marked as Polivy, is the first-of-its kind. It contains an antibody that targets CD79b, a protein that is expressed in the majority of B-cell malignancies. The drug was granted Priority Review by the FDA in February 2019 for the treatment of patients with relapsed or refractory diffuse large B-cell lymphoma. This was granted on the back of encouraging results from a phase Ib/II randomised clinical trials which tested out the drug in combination with rituximab or obinutuzumab plus bendamustine (Siegall, Genentech). In June 2019 the FDA approved polatuzumab vedotin-piiq) in combination with bendamustine plus for the treatment of adults with relapsed or refractory diffuse large B-cell lymphoma, who have received at least two prior therapies (Genentech-Roche).

Polatuzumab vedotin is just one of many ADC candidates other companies are developing using SGEN's proprietary technology. By 2014 there were more than 30 ADC drugs in clinical development and more than 18 of these use SGEN's technology. This included Depatux-M (ABT-414) being developed by Abbvie which targets the epidermal growth factor receptor (EGFR) which is being investigated for the treatment of glioblastoma (SGEN 2014; Genentech, Brain Tumor Charity, ADC). Another drug is being developed by GSK. The drug, GSK2857916, targets the B-cell maturation antigen and has been given Breakthrough Therapy Designation by the FDA. It is currently in clinical development for patients with relapsed/refractory multiple myeloma and other advanced hematological malignancies (GSK).

Not having sufficient resources internally, SGEN initially outsourced the bulk of its manufacturing. SGEN has recently shifted this strategy towards manufacturing some of its products. This reflects the fact that the company has grown in size and begun to produce promising drugs. Given that building a new facility involves a lot of time and expense, in 2017 SGEN took the decision to purchase a manufacturing facility from BMS. Built in 1996 the BMS plant is located in Bothell, which is just ten minutes drive from the SGEN’s headquarters. One of the advantages of buying a pre-existing facility was that it had already been validated and approved by regulators to produce drugs. The facility, however, does not have the capacity to manufacture all of the products that SGEN has in its pipeline, so the company continues to work with many contract manufacturing organisations based in different parts of the world (Wright).

S James, 'From Pharm to Market at Seattle Genetics', The Seattle Times, July 2017.Back