The foundations of Seattle Genetics

Seattle Genetics (SGEN) was founded in January 1998 by the scientists Clay Siegall and Perry Fell. They were inspired to create the company after their former employer Bristol Myers-Squibb (BMS) closed down its facility in Seattle that was dedicated to the development of antibody and biological therapies for cancer. Siegall and Fell believed the new company would provide them with the avenue they needed to continue the development of targeted antibody therapies that they had started at BMS and which they saw as the future for cancer treatment. Their aim was to develop targeted products for the unmet needs of cancer patients (Siegall).

Only one antibody drug had made it to market for cancer by the time Siegall and Fell set up SGEN. This was edrecolomab (Panorex). Developed by Centocor, an American biotechnology company, the drug used a murine monoclonal antibody (mAb), first made by the Wistar Institute in 1980, that targeted the EpCam antigen expressed on various carcinomas. Edrecolomab was approved by German regulators in 1995 as an adjuvant therapy for postoperative colorectal cancer. It never gained FDA approval, however, and was subsequently withdrawn from the European market because of safety and efficacy questions.

The story of edrecolomab underlines just how difficult scientists found it to develop targeted antibody-based cancer treatments in the early years. The idea of using antibodies to fight cancer stretched back to the late nineteenth century, but was difficult to realise because of the lack of means to produce them on a large-scale in the laboratory. This all changed in 1975 when César Milstein and Georges Köhler published their technique for making monoclonal antibodies (mAbs) Click here for more information.

The new mAbs were quickly embraced as the long-sought after tool for defeating cancer because they could be produced to bind to very specific receptors (antigens) on cells (figure 2), and offered a mechanism to deliver more precisely powerful tumour-killing agents, such as chemotherapeutic drugs, radioisotopes, or toxins, into tumours without harming healthy tissue. Despite the early promise of the new technology, scientists wrestled for many years to produce mAbs that targeted ‘tumour-specific’, as opposed to ‘tumour-associated’, antigens. On top of this, the early mAbs carried the risk of provoking unwanted immune responses in patients because they were produced in mice. This issue began to be resolved from the mid-late 1980s through the deployment of genetic engineering which helped to increase the human protein component of mAbs (figure 3) (Marks). 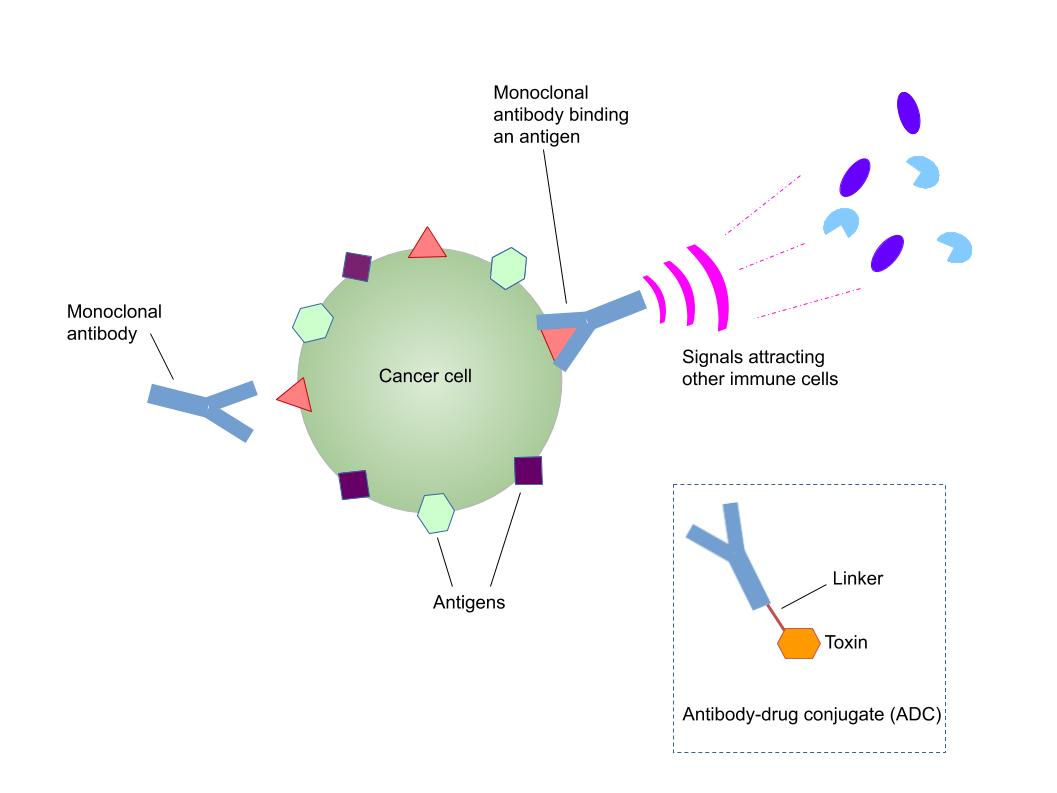 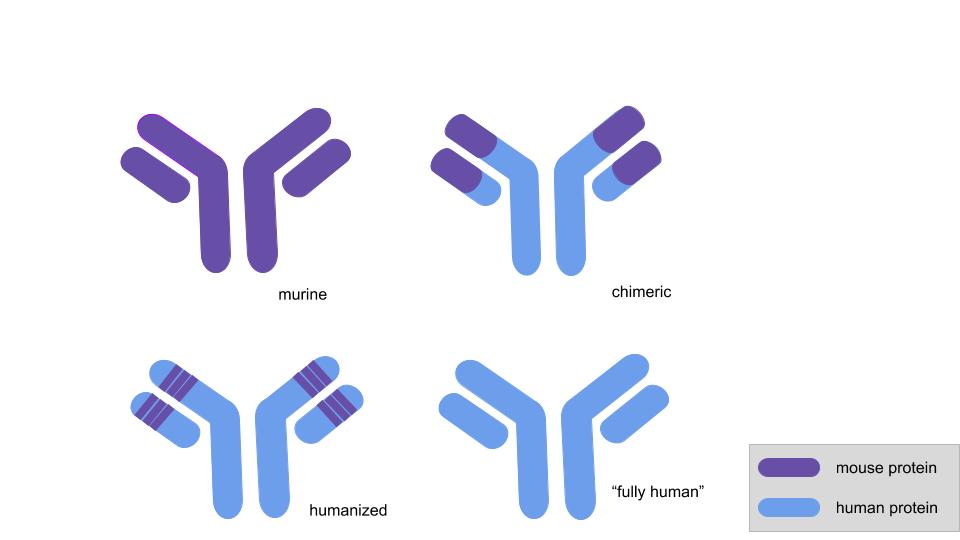 Table 1: Percentage of mouse and human protein components in different forms of mAbs

In November 1997, just three months after SGEN’s incorporation (July 1997) and two months before the company started operation (January 1998), the FDA approved rituximab (Rituxan), a chimeric mAb for the treatment of relapsed or refractory B-cell lymphoma. Developed by Idec and Genentech, rituximab's approval marked a major turning point for antibody-based cancer treatment. Its significance lay not only in the fact that it was the first cancer mAb drug to receive US approval and the fact that it represented a major advance in the treatment of hematological malignancies. The drug also demonstrated that in some circumstances a mAb that targeted an antigen on both normal and tumour cells did not cause havoc in the rest of the body. Moreover, the actual development of rituximab had been remarkably fast, taking just seven years from discovery to approval (Marks).

Siegall had a particularly strong personal motivation for creating targeted therapies for cancer. When he was 19 years old his father had been diagnosed with cancer and he had seen his father struggle for five years with cancer treatments before he died. Having witnessed his father suffer the brutal effects of chemotherapy, Siegall was determined to find a way to lessen the toxic effects of cancer drugs (Siegall, Staff, Anon).

Siegall and Fell’s vision was not to develop drugs for any particular type of cancer, such as breast or lung cancer. Rather their objective was to develop products that could hone in on particular antigens on cancer cells and leave other healthy cells alone. There had no rules as to what type of drug they wanted to pursue. From the start they envisaged creating a pipeline with a number of different experimental products for advancement into clinical trials. This was important because of the difficulty of finding a drug which had both a strong potency and a good safety profile. Initially, SGEN focused its energies on the development of different antibody forms for treatment, including genetically modified monoclonal antibodies (mAbs) and antibody-drug conjugates (ADCs). In later years the company expanded its pipeline to include small molecule drugs (Siegall).

Siegall and Fell’s overall ambition was to build a small version of Genentech. By the late 1990s Genentech had grown into a very large company, which retained its independence while being owned by Roche. Neither Siegall nor Fell saw Genentech as a competitor. Instead they saw it as a role model and potential partner for SGEN. Accordingly they spent a lot of time talking to people in Genentech to understand how the company structured it science and committees. Based on these discussions they set up all of SGEN’s development review and research committees as well as its other committees along similar lines as Genentech. Reflecting its strong scientific focus, most of SGEN's employees were engaged from the start in research, development and clinical activities (figure 4). 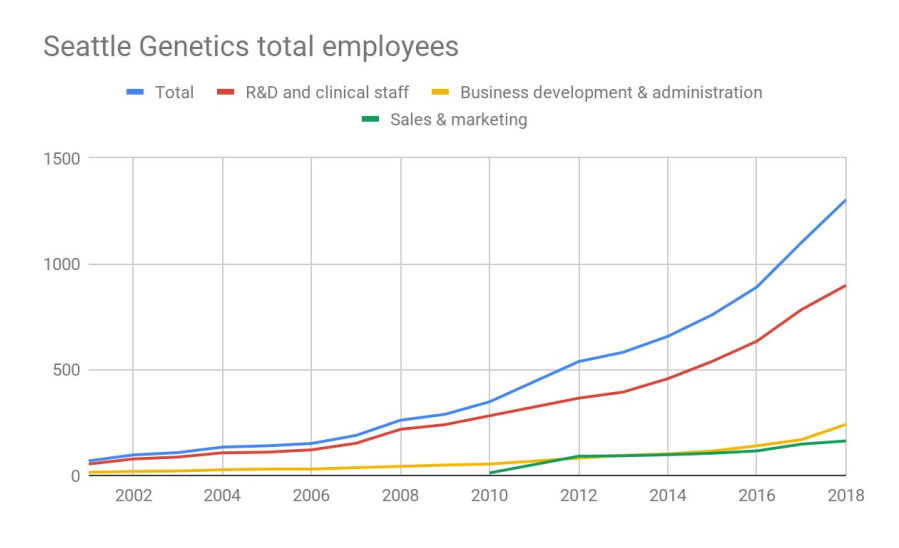 Based on their assessment of other biotechnology companies, the two founders realised the risks of setting up a new company were not for the faint-hearted. Siegall, who drafted SGEN’s first business plan, calculated that on average start-ups took fourteen years to get their first product to market and that this process consumed a billion dollars. Eight out of ten entrepreneurs who started such a business failed within the first 18 months (Wright ).

To get the ball rolling, Siegall and Fell began an intensive round of presenting data and information to potential investors. One of the first investors that they persuaded to come on board was Siegall’s old boss who had left BMS. He put in the first $1 million into SGEN (Siegall). By 1998 they had successfully secured another $6.5 million in Series A funding from a number of venture capital companies based in Seattle, the Bay Area and New York. The Series A funding was led by OVP Venture Partners, Sofinnova Venture Partners and Indosuez Ventures (Dobmeier). A year later SGEN gained an extra $30 million in series B funding from a number of private investment firms, including those of Microsoft co-founders Bill Gates (Cascade Investment) and Paul Allen (Vulcan Ventures). From 1998 to the end of 2000 the company had a cumulative loss of $12.8 million (A/R 2001, p.9; CNN).

SGEN was not only dependent on cash to survive. It also needed to build a strong platform. In March 1998 Siegall and Fell managed to license from BMS some of the mAb-based cancer based technologies that they had helped to develop. This included the rights to multiple patents, eight mAbs, a ribosome-inactivating protein and some chemical linkers and enabling technologies. They also gained two clinical-grade drug candidates (SGN-15 and SGN-10) for use in trials (A/R 2001, p.9).In addition to BMS, SGEN signed a license agreement in June 1998 with Mabtech AB, a Swedish mAb company (A/R 2001, p.10). This provided SGEN with a mAb that bound to the receptor CD40, a potentially useful target for cancer immunotherapy.

In October 2000 SGEN also gained a license from ICOS Corporation, an American biotechnology company based in Seattle, to use its CHEF expression system to develop a DNA sequence that it needed to help it manufacture SGN-30, a genetically engineered mAb. SGEN was in the process of developing the compound for clinical trials to treat hematologic malignancies, including Hodgkin and anaplastic large cell lymphoma (A/R 2001, p.2). By 2002 it had also managed to license some mAbs from CLB-Research and Development, a Dutch company, and from the University of Miami. It had also licensed some cancer-killing drugs from the New Zealand company Proacta Therapeutics and Arizona State University (A/R 2002).

Lara V Marks, Lock and Key of Medicine: Monoclonal antibodies and the transformation of medicine (2015).Back

<< Introduction to the case study
Establishing the platform >>