How Seattle Genetics established its technology platform and funding stream

Soon after SGEN started its operations, the FDA approved Mylotarg (gemtuzumab ozogamicin), as a treatment for acute myeloid leukemia. Developed by Pfizer, this was the first ADC drug to ever reach the market. What was heartening about Mylotarg was that the FDA had given it accelerated approval. Announced in May 2000 the news about Mylotarg was particularly helpful to SGEN because it helped to validate its own strong investment in ADC drugs.

ADC drugs are made up of three distinct components. The first is a mAb that is capable of targeting a unique receptor found on the surface of a tumour. The second is a cytotoxic compound, also known as the payload or warhead, that can destroy cancer cells. And the last is a linker, which acts as a bridge between the mAb and payload and allows for the timely release upon delivery of the payload inside cancer cells (figure 5).

ADC therapy was not a new concept when SGEN was founded. Most ADCs developed up to the 1990s, however, had major shortcomings. This included undesired side-effects due to premature off-target release of the toxin, low drug potency and unwanted immune responses. One of the key issues was to find a suitable chemical linker to bind the mAb and the toxin so that the therapy did not disintegrate in the bloodstream before it reached its target. Another was to produce a mAb that would not clear the body quickly and could target a specific tumour receptor. Getting the right cytotoxic compound and dose was also important. All these factors had been major stumbling blocks in generating the first ADCs. 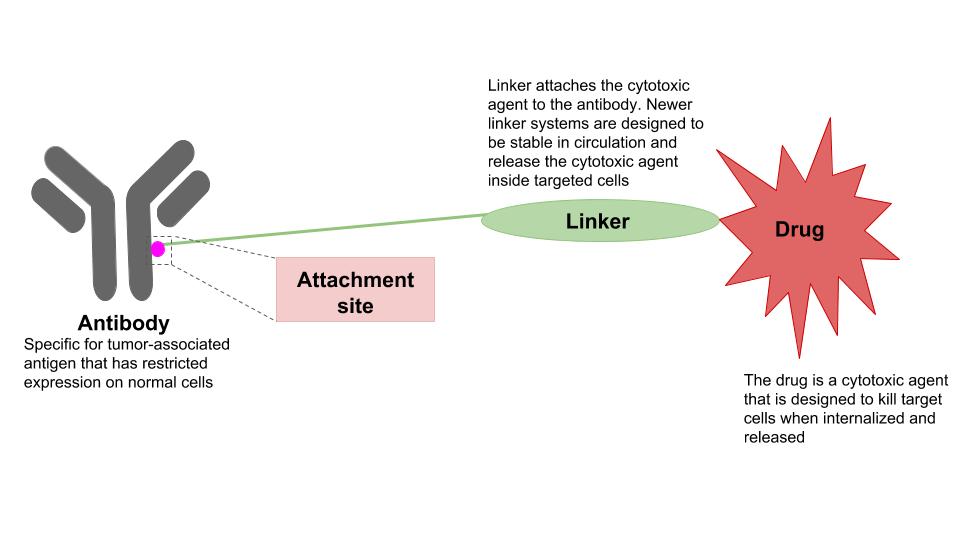 By 2000 SGEN had already made several advances in its development of ADC drugs. This included the use of potent cell-killing compounds, such as monomethyl Auristatin E (MMAE), a synthetic antineoplastic agent derived from Dolabella auricularia, a large sea slug species. It had also begun to devise a variety of linker technologies, including enzyme-cleavable linkers, for attaching toxic agents to an antibody. These linkers were very stable in the bloodstream.

SGEN went public in March 2001. J P Morgan led the initial public offering (IPO). At this point the company had the advantage of both its leadership position in ADC technology and its strong backers. This included Cascade Investments and Vulcan Ventures who stood to gain 9.3% stake in the company after the IPO (A/R, 2001, pp.10-11). It was also able to leverage the fact that it had already struck two important agreements. The first was with Genentech, signed in June 1999. This involved Genentech licensing SGEN’s anti-CD40 programme in exchange for US $4 million in equity purchases in SGEN. Genentech also paid an upfront payment of $41 million and promised milestone payments and royalties on the first product and a further $20 million and future royalties on sales of additional products incorporating SGEN’s technology. The second deal was with Medarex, finalised in February 2001. This entailed the two companies jointly developing human mAbs towards certain antigen targets associated with breast cancer and melanoma. As part of the agreement Medarex committed to investing $2 million in SGEN (A/R 2001, pp.10-11).

SGEN’s IPO netted $45.7 million, after it had paid the fees and other expenses involved (DeSilver). Overall SGEN’s executives were pleased with the sum raised, because they had faced a particularly tough market. It also turned out that the IPO took place just in time because the 9/11 tragedy took place just six months later, which led to a major stock market downturn for the next couple of years. Just how dramatic an impact the event had on SGEN can be seen from the fact that its shares were worth $7 when the IPO was launched and these went down to as low as $2.10 (Siegall).

Fortunately SGEN continued to gain investment despite the difficult financial climate. In part this was aided by its agreement with Genentech. Not only did the deal provide SGEN with some non-diluted capital it also made other investors take notice of what SGEN was doing. By 2003 SGEN had managed to attract a number of top investors. This included Baker Brothers Investment (BBI), a healthcare specialist firm managed by Felix and Julian Baker. Felix Baker went on to become a director of SGEN and BBI to become the company’s biggest shareholder (Siegall). In 2015 BBI’s holding in SGEN was valued at $1.5 billion (Budwell). A year later BBI was registered as having 44 million shares in SGEN. This was about 31 percent of the company (Terry).

In addition to raising money from investors, SGEN was able to leverage its leadership in the ADC field and began licensing out its technology to other companies to develop potential therapies (A/R 2003, p.4). The first two deals of this nature were struck in 2001. One was with Eos Biotechnology and the other was with Celltech. Both companies had access to SGEN’s ADC technology for use with multiple mAbs (A/R 2001, p..4).

Multiple companies licensed SGEN's ADC technology over the years (table 2). One of the advantages of such agreements was they provided immediate funding for the company. In the early years companies usually paid SGEN $2 million upfront to license the technology. SGEN also stood to gain milestone payments and royalties on product sales in the future. In some cases the agreements also provided SGEN with product rights that further expanded its product pipeline. Between 2001 and 2005 SGEN raised approximately $50 million through a combination of support fees, milestone and equity purchases as a result of its technology licensing deals. This income increased steadily over time. It reached $200 million in 2012 and $350 million by 2017 (A/Rs 2001-2017).

Early on SGEN managed to establish an important relationship with Genentech. In 1999 Genentech agreed to come on board in the joint oversight of SGN-40/SGN-14 (dacetuzumab). This was a drug that had emerged out of SGEN's programme for the treatment of CD40-positive cancers, most notably hematologic malignancies. In January 2007, Genentech took over the exclusive development and commercialisation of SGN-40. Under the deal Genentech made an upfront payment of $60 million to SGEN and agreed to make milestone payments in excess of $800 million and double-digit royalties on any sales. Genentech also undertook to cover all the costs SGEN incurred in relation to the research, development, manufacturing and commercialisation of the drug (A/R 2008, p.9). Just how valuable Genentech was to SGEN can be gauged from figure 6, which compares the amount of money SGEN received from the Genentech deal in 2007 with the other sources of funding it had raised up to this point. 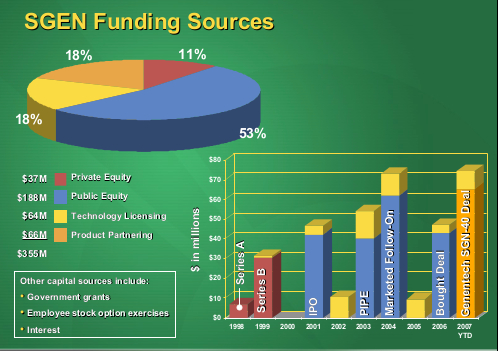 The two companies agreed to undertake multiple clinical trials with SGN-40 as both a single-agent and combined with standard therapies for treating non-Hodgkin lymphoma (NHL) and multiple myeloma. This plan, however, hit a snag in October 2009 when it became clear that the drug would fail to meet its endpoints in a phase IIb combination clinical trial for diffuse large B-cell lymphoma. The key problem was that while the drug appeared to be a good treatment for some patients, the overall response rate was too small to justify making it into a commercial product (Siegall). In the end Genentech terminated the agreement and returned all of its rights to the drug to SGEN (A/R 2010, p.12).

Genentech’s decision did not completely end its partnership with SGEN as it was still using the SGEN ADC technology. Nonetheless, it was a blow because the SGN-40 project had provided SGEN with a major source of funding. Just how important it was can be seen from the fact that in 2010 Genentech paid SGEN just over $82 million. This represented 76 per cent of the total revenues SGEN earned from licensing and collaboration agreements that year, which was just over $107 million (A/R 2010, p.74).

Fortunately, the funding lacuna was soon filled with a new revenue stream from Takeda Oncology Company (Millennium). SGEN first entered its collaboration with Takeda in December 2009. It was for the joint development and commercialisation of brentuximab vedotin (SGN-35). This was an ADC drug which SGEN had generated that was about to enter advanced clinical trials for the treatment of relapsed and refractory Hodgkin lymphoma and a phase II trial for systemic anaplastic large cell lymphoma (sALCL).

The partnership with Takeda provided SGEN with expertise to launch a drug on the international market. Under the terms of the agreement, SGEN retained full commercialisation rights to the drug in the United States and Canada, while Takeda was to commercialise it in the rest of the world. Takeda was expected to layout at least $75 million in the first three years to help with the worldwide development costs of the drug and to make an upfront payment of $60 million to SGEN. It also committed itself to pay more than $230 million in milestone payments to SGEN (A/R 2010, p.12).

Ordered by start date and rounded to the nearest US$ million.

In addition to its partnership with Takeda, SGEN had signed up a number of additional ADC collaborations with other companies by 2010 (table 2). It also entered into a licensing agreement with Abbvie in March 2011 to work together on experimental ADCs to treat cancer. This entitled SGEN to receive an upfront payment of $8 million and up to $255 million in license fees and milestone payments per target. SGEN also stood to gain royalties on any product sales. Abbvie took responsibility for all the research, product development, manufacturing and commercialisation of any ADC products that came out of the collaboration. 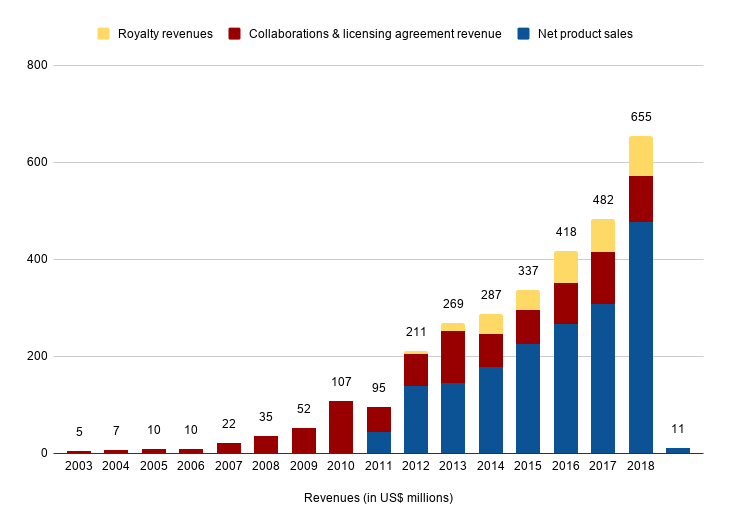 As figure 7 shows, SGEN was initially dependent on private equity to get its operations off the ground and then raising public equity. By 2007 the company had managed to raise $37 million in private equity and $188 million in public equity. This was bolstered by revenue from product partnering ($66 million) and technology licensing ($64 million). Collaboration and licensing agreements continued to be an important funding stream for SGEN in the following years (figure 7). Indeed, they constituted the bulk of the company’s capital in 2014 and 2015 and continued to be important even after revenues began to flow in from the product sales of its first drug, Adcetris, approved for market in 2011. By 2018 SGEN had managed to raise over $911 million from its different collaborations. This compared favourably with other funding sources. For example, SGEN had raised just over $1.2 billion in public and private funding by 2017. The flow of money from royalties also began to increase over the years, which rose significantly from 2014. All of this improved the company’s financial strength (Boskoff).

G Budwell, 'Here's why the Baker Bros. are gobbling up this emerging cancer company', The Motley Fool, 5 Sept 2015, https://www.fool.com.Back

D DeSilver, 'Seattle Genetics sells $49 million of stock in IPO', The Seattle Times, 8 May 2001.Back