Florence Bell was a physicist who made the very first X-ray studies of DNA, a complex molecule that contains the genetic blue-print for building and maintaining an organism, and showed that this method could be used to reveal its regular, ordered structure. In so doing, Bell laid important foundations for later work by Rosalind Franklin, Maurice Wilkins, James Watson and Francis Crick which culminated in the discovery of DNA's famous double-helix. 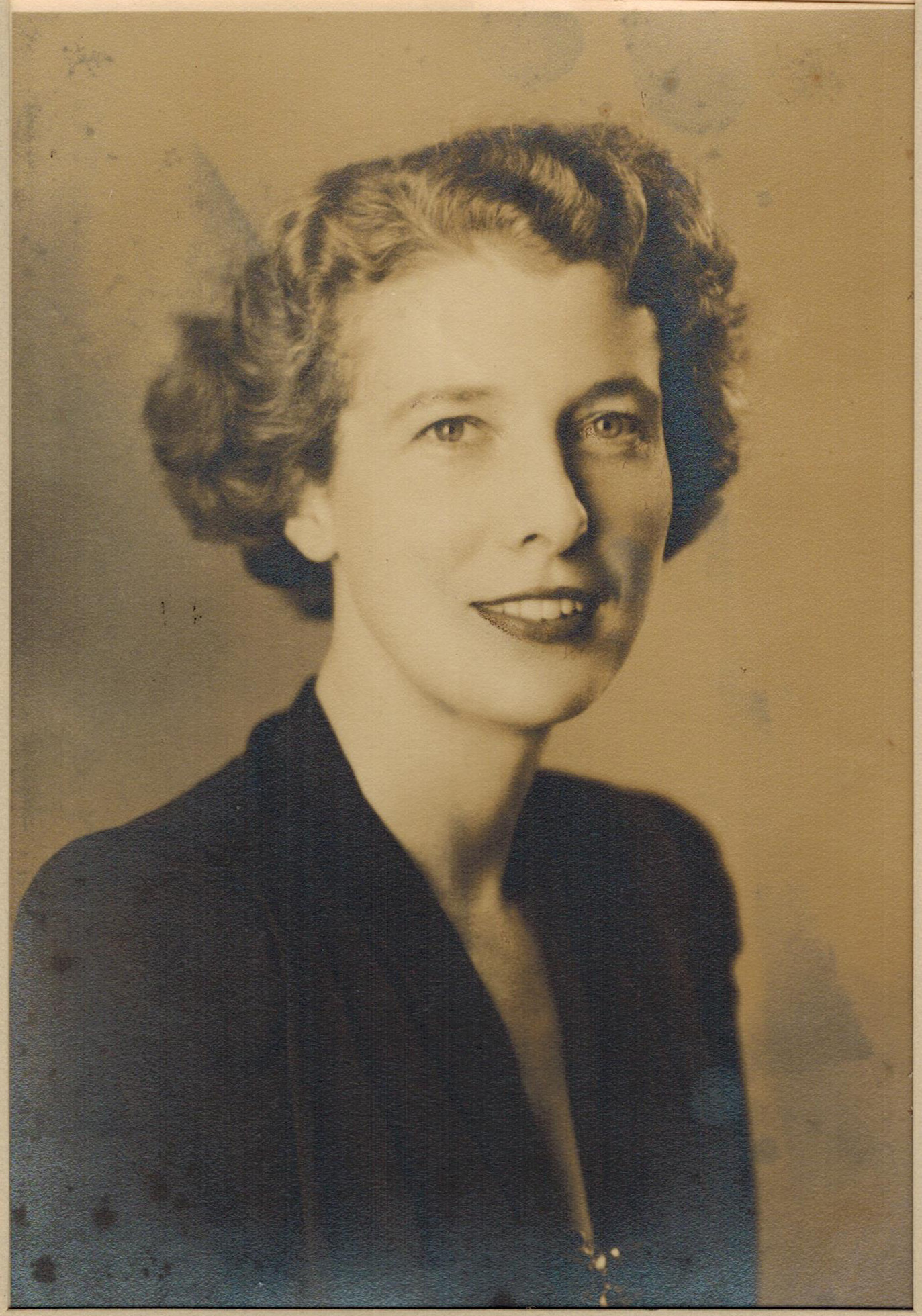 Bell was born on 1st May 1913 to Thomas Bell, a photographer for the Illustrated London News and advertising manager at Kodak Ltd, and Annie Mary Lucas of 47 Hanover Road, Brondesbury Park, North-West London.

Bell attended Haberdashers’ Aske's Girls' School in Acton, London, where her headmistress described her as 'an eminently satisfactory pupil' who displayed an impressive range of talents, both academic and non-academic (1, 2). These included reading French and German, playing the piano and enjoying a range of sports such as tennis, lacrosse, and swimming. Perhaps somewhat unusually for the time, she was also later reputed to have been a good cricketer (3). Her academic talents earned her the position of Head Girl at school and in 1932 she won a place at Girton College, Cambridge where she read for the tripos in Natural Sciences, specialising in chemistry, physics and mineralogy.

After completing her degree in 1935 Bell worked for a short time in the Cavendish Laboratory at Cambridge with the scientist John Desmond Bernal who was a pioneer in a new field of science called X-ray crystallography. The new science used the scattering of X-rays to determine the spatial arrangement of atoms and molecules in crystals, a method first invented in 1913 by the physicist Sir William Bragg and his son Lawrence, for which they were jointly awarded the Nobel Prize in Physics two years later. But whereas the Braggs originally used X-ray crystallography to determine the structure of simple compounds such as salt, Bernal was now applying it to resolve the structure of more complex molecules such as enzymes that are found in biological systems – and it was in this area of research that Bell would distinguish herself.

After leaving Cambridge in 1936, Bell continued her X-ray work by joining Lawrence Bragg's team at Manchester before moving to Leeds in 1937 to take up the post of research assistant to the physicist William Astbury. Working in the Department of Textile Industries at the University of Leeds Astbury was, like Bernal in Cambridge, also pioneering the application of X-ray crystallography to biological materials but unlike Bernal who was studying globular proteins such as the enzyme pepsin, Astbury's research focused on fibrous proteins of the kind found in nails, hair and wool. Based on his early X-ray studies of such fibres, made with the aim of improving knowledge about wool for the local textile industries, Astbury had established himself as an international authority in this field and was a populariser of the new science known as 'molecular biology' which sought to understand living systems in terms of the structure of the molecules from which they were made.

When Astbury first wrote to Bragg asking whether he could recommend a skilled X-ray crystallographer to help him with this work, Bragg showed no hesitation in proposing Bell as an 'excellent candidate'. As he put it, he was reluctant to see Bell go because she was 'somebody who is capable and experienced and really gets on with the job' (4). Astbury was not disappointed. He quickly recognised Bell's talents and dubbed her his 'vox diabolica' for her willingness to challenge him on those occasions when his own excitement ran ahead of his results (5). Astbury also chose Bell to represent the work of his laboratory to a major conference that was held in Leeds in 1939 by the Institute of Physics. Yet for the local press who reported on the meeting, it was not Bell's research that left them stunned but simply the fact that she was a woman doing science.

With the headline, 'Woman Scientist Explains', (Figure 2) readers of the Yorkshire Evening Press might be forgiven for thinking that a new zoological specimen, previously unknown to science, had just been unearthed in Leeds (6). And while Bell might have been flattered to read of herself described as a 'slim, 25-year old Cambridge graduate', it is more likely that she would have wanted to have been remembered for blazing the trail in molecular biology (7). For by the time she gave her presentation in 1939, Bell had already helped to lay the foundations for one of the biggest discoveries of the twentieth century - the double-helix of deoxyribonucleic acid (DNA).

At first sight, the subject of Bell's research might seem unlikely to lead to a scientific milestone. Her PhD thesis described the study of a rather eclectic range of biological fibres including proteins found in jellyfish, shark's fin and rare diseases of hair. But amongst these, one chapter stands out from the rest. This described the X-ray analysis of a very different kind of biological fibre – one that was not made of protein, but of DNA. 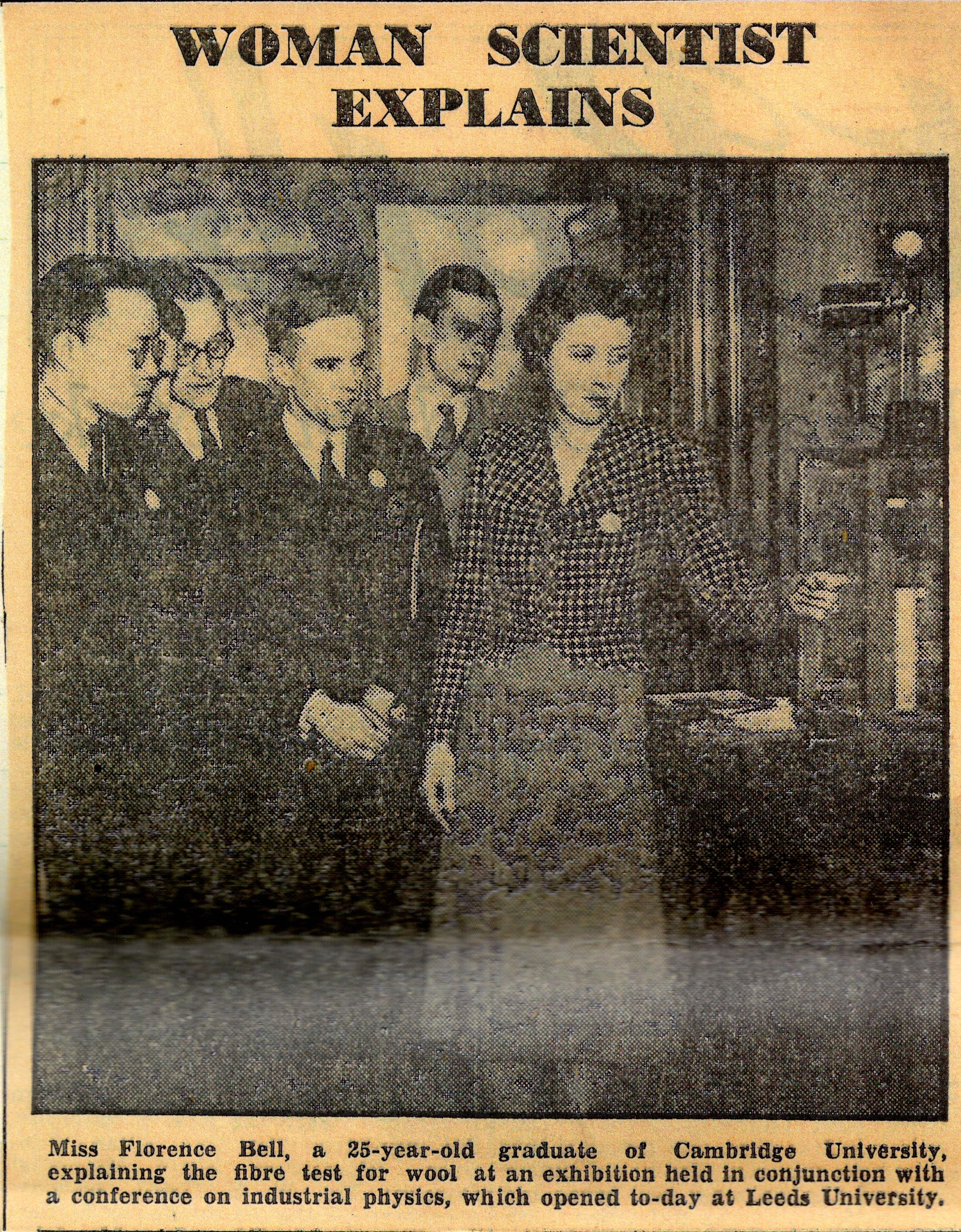 In 1938, she had made the very first successful X-ray studies of DNA and shown that this method could be used to reveal the regular, ordered structure of the molecule (Figure 3). From her work she proposed an early model of its structure which, although now known to be wrong, was nevertheless valuable. Firstly, Bell's model showed that the bases, which would later be shown to carry the genetic message, stack up on top of each other which she and Astbury described as being like 'a pile of pennies'(8). Secondly, from her X-ray studies, Bell and Astbury were able to determine the precise distance between adjacent bases – a measurement which gave James Watson and Francis Crick a vital foothold when they began building their own model of DNA. 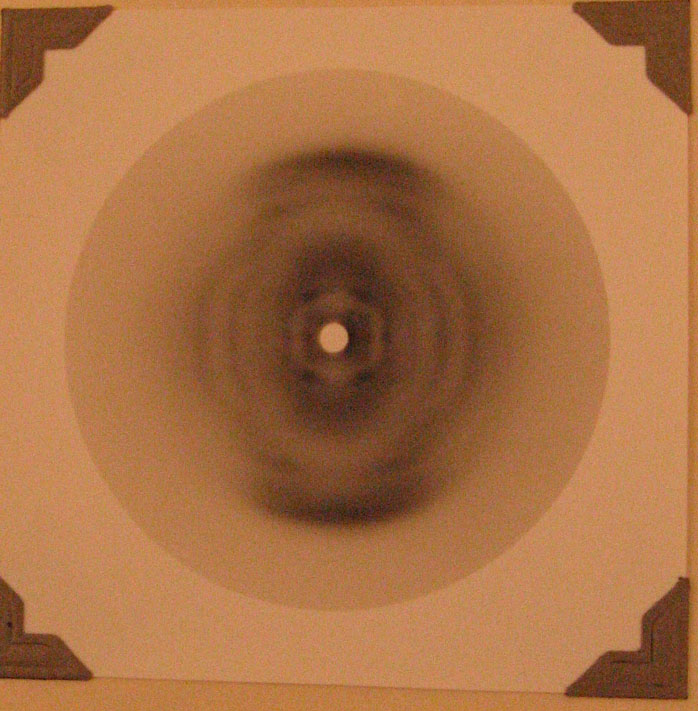 Figure 3. An early X-ray diffraction photograph of DNA fibres taken by Florence Bell. This may just look like a smear of black spots, but from it she and Astbury were able to measure key distances in the DNA molecule. Florence Bell, PhD Thesis, Special Collections, University of Leeds, Brotherton Library. Available online at https://explore.library.leeds.ac.uk/special-collections-explore/650413. Reproduced with permission from the Special Collections, Brotherton Library, Leeds University.

Bell's work is also significant because it was done at a time when DNA was thought to be of little interest and proteins were believed to be the genetic material. Yet, Bell was open to the possibility that DNA might be of far greater importance. In her PhD thesis, she wrote: ‘Possibly the most pregnant recent development in molecular biology is the realisation that the beginnings of life are closely associated with the interactions of proteins and nucleic acids’ (9). And while she may not have understood the exact function of DNA, it is clear that Bell had already anticipated profound implications for future research in this area, saying 'the limits of our horizons widen beyond imagination. We shall have glimpsed at last what we are' (10).

Unfortunately, just as it seemed to be gathering momentum, Bell’s promising work on DNA came to an abrupt end. In 1941 she was summoned for war service and joined the Women’s Auxiliary Air Force (WAAF) where she worked on the development of airborne radar. Desperate to retain her, Astbury wrote to the Rockefeller Foundation to secure her funding and to the War Office explaining that he ‘could hardly carry on without her help' (11). But even had the War Office been willing to release Bell from her duties, Astbury's efforts would have been in vain. In January 1943, Bell thanked the University of Leeds for keeping her post open, but explained that, as she was now married to an American serviceman called Captain James Sawyer who also had a background in physics and with whom Bell had been working, she would soon be leaving Britain to start a new life in the United States (12).

Having settled in the USA Bell worked for the British Air Commission in Washington D.C. until 1944 and then as a research chemist at the Magnolia Petroleum Company, Beaumont, Texas, before giving up her career to look after her family (13). It is perhaps in recognition of these changed circumstances, that when Bell died on 23rd November 2000 whilst on a visit to her sister in Ludlow, Herefordshire, England, her official occupation was recorded as having been a housewife. Yet as well as being a dedicated mother she was also a scientific pioneer whose demonstration that the structure of DNA could be revealed using X-ray methods laid the foundations for the later work by Maurice Wilkins, Rosalind Franklin and Raymond Gosling at King's College, London, that helped James Watson and Francis Crick to solve the double-helical structure of DNA.

Kersten Hall (@monkeynut_coat) graduated from St. Anne's College, Oxford with a degree in Biochemistry before embarking on doctoral research on how viruses control human gene expression at the University of Leeds. He worked for several years as a research fellow in molecular biology in the School of Medicine before finally putting down his pipette, hanging up his white coat and swapping the laboratory for the library to study the history of science. He is now an honorary fellow in the School of Philosophy, Religion and History of Science at the University of Leeds where his research focusses on the history of molecular biology. His book The Man in the Monkeynut Coat (Oxford University Press, 2014) tells the story of William Astbury and was shortlisted for the 2015 British Society for the History of Science Dingle Prize as well as being featured on a list of selected titles for 2014 by Professor Stephen Curry in The Guardian). He is currently working on a new book about the discovery of insulin.

KT Hall, The Man in the Monkeynut Coat: William Astbury and the Forgotten Road to the Double-Helix (2014).