In 1956 Kornberg isolated the first DNA polymerizing enzyme, now known as DNA polymerase, which he identified as the mechanism for DNA replication. 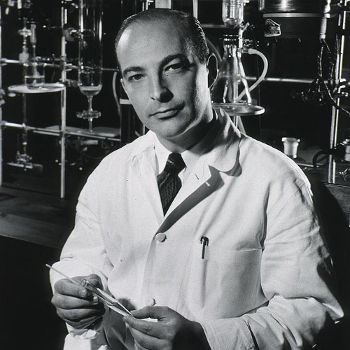 Arthur Kornberg in a laboratory

Arthur Kornberg was the youngest son of three boys born to Joseph and Lena (nee Katz) who married in 1904 and emigrated to Brooklyn New York in 1900 from Austrian Galicia (now part of Poland). Kornberg's father could speak at least six languages but had no formal education. He was a tailor who specialised in making cloaks. For almost 30 years Kornberg's father worked as a sewing machine operative in the sweat shops of the Lower East side of New York. Driven away from working in sweat shops due to poor health, Kornberg's father later opened a small hardware shop in Brooklyn. It was in this shop that Kornberg had his first taste of work. From the age of 9, he began regulary assisting and serving customers. This he did in between school work. Later Kornberg also worked in a men's clothing shop while attending college. The little that he earned was a vital supplement to the family's income which was hit hard by the Great Depression. In 1939 Kornberg's mother died from a spore infection after a routine gall bladder operation. This inspired Kornberg to have a lifelong fascination for spores. In 1946 Kornberg married Sylvy Ruth Levy, a biochemistry graduate whom he had met at the University of Rochester and became better acquainted with when Sylvy began working at the the National Cancer Institute in Bethesda. They had three sons Roger, Thomas and Kenneth. After 40 years of marriage Sylvy died from a rare neurological disorder. Following this Kornberg married Charlene Walsh Levering. He was to marry again after Charlene's death. His third wife was Caroline Frey Dixon. She survived him.

From early on Kornberg was a high achiever and he skipped several grades at primary school. He graduated from Abraham Lincoln High School at the age of 15. In 1933 he began studying at the City College of New York (CCNY) and graduated four years later with a BS in chemistry and biology. Kornberg briefly considered an academic career in the field, but given the hardships he and his family experienced as a result of the Great Depression decided medicine would provide a better livelihood. In 1937 Kornberg was accepted to study medicine at the University of Rochester. He was one of only five students out of 200 CCNY premedical students to gain acceptance to medical school that year. Kornberg was awarded an MD in 1941. Kornberg completed his medical training in 1942 having spent a year as an intern at Strong Memorial Hospital in Rochester, New York.

Following his internship, Kornberg served as a navy doctor on a US Coast Guard vessel in the Caribbean. This he did as part of his World War II military service. Expecting to remain on duty at sea for the duration of the war, Kornberg's career took an unexpected turn in 1942 when Robert Dyer, director of the National Institutes of Health (NIH) in Bethesda, Maryland, came across an article Kornberg had written while a medical student. In the article Kornberg outlined some findings he had made as a result of measuring bilirubin levels in his and fellow students' blood. Kornberg had in part been inspired to conduct the project because he suffered from mild jaundice. His research indicated that high levels of bilirubin frequently occurred as a result of a reduced capacity to excrete it, a syndrome now recognised as a benign familial trait called Gilbert's disease. Dyer was particularly interested in Kornberg's findings because he was trying to understand an outbreak of jaundice among service members who had been inoculated with the new yellow fever vaccine. Impressed by Kornberg's article, Dyer arranged for Kornberg's transfer to the NIH. Once at NIH Kornberg did not pursue jaundice as a research topic and instead began investigating rats rats who appeared to developl folic acid deficiency after receiving sulpha drugs. Bored by the feeding of rats, Kornberg soon developed an interest in enzymes, and in 1946 moved to Severo Ochao's laboratory at New York University Medical School where he speant a year learning techniques for enzyme purification. This he did while taking summer courses at Columbia University to boost his knowledge of organic and physical chemistry. Following this, he spent 6 months in the laboratory of Carl and Gerri Cori at Washington University in St Louis to enhance his biochemical skills. From 1947 to 1953 Kornberg became chief of the Enzyme Section within the Institute of Arthritis and Metabolic Diseases at NIH. During these years he became particularly adept at identifying and purifying enzymes and discovered several enzymes instrumental to metabolic respiration cycles. Such work helped awaken his desire to find enzymes that help assemble DNA. Between 1953 and 1959 Kornberg headed the Department of Microbiology at Washington University in St Louis. In 1959 he became chair of the new biochemistry department at Stanford University School of Medicine. On moving to the department Kornberg took many of his Washington University faculty and staff and built a tight-knit research group around identifying and delineating the workings of various enzymes involved in DNA replication. He continued conducting full-time research at the department into his eighties. In addition to his academic work, Kornberg helped found the DNAX Institute Molecular and Cellular Biology in 1980.

Kornberg is most well known for his discovery and purification of DNA polymerase from Escherichia coli, an enzyme that he and his colleagues demonstrated was instrumental in the synthesis of DNA. Published in 1956, this work established for the first time that DNA replication was driven by an enzyme. Kornberg was awarded the Nobel Prize in Physiology or Medicine in 1959 for this achievement. Subsequently Kornberg and his colleagues discovered enzymes responsible for DNA repair and rearrangement and others responsible for the start and elongation of DNA chains and chromosomes. This opened the avenue to manipulating DNA, thereby paving the way to the development of recombinant DNA technology and the engineering of genes and chromosomes. In addition to the Nobel Prize, Kornberg was awarded the Paul-Lewis Award in Enzyme Chemistry (1951), the National Medal of Science (1979) and the Gairdner Foundation Award (1995). He was also elected to the National Academy of Sciences in 1957 and the Royal Society of London in 1970.

DNA polymerase isolated and purified and shown to replicate DNA

First synthesis of DNA in a test tube