An Italian scientist, Rita Levi-Montalcini helped discover the chemical tools the body uses to direct cell growth and build nerves. This knowledge underpins current investigation into how these processes go wrong in diseases like dementia and cancer. 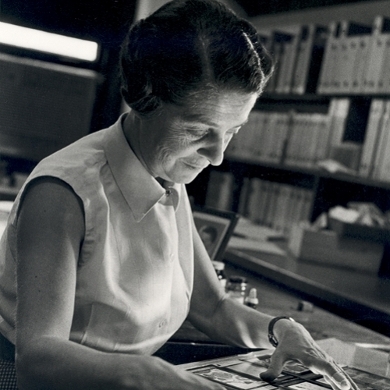 Rita Levi-Montalcini was the daughter of a wealthy Italian Jewish family. Her father, Adamo Levi, was an electrical engineer and mathematician and her mother, Adele Montalcini, was a painter. Together with her identical twin sister, Levi-Montalcini was the youngest of four children. During the Second World War, Levi-Montalcini and her family were forced to abandon Turin with the invasion of Italy by the German army. They fled first to Piemonte and then to Florence where they lived underground until the end of the war. Seeing her mother play second-fiddle to her father and the subordination of many women around her, Levi-Montalcini made the decision early in life never to marry or have children. In her twenties she decided to pursue a life in medical research after seeing a close family friend die from stomach cancer.

Brought up by a father who believed that a professional career interfered with the duties of a wife and mother, Rita Levi-Montalcini was initially discouraged from going to university. Eventually, however, at the age of 20 Levi-Montalcini persuaded her father to let her attend medical school at the University of Turin. While at the university Levi-Montalcini was taught by the neurohistologist Giuseppe Levi who awakened her interest to study the developing nervous system. Two of her contemporaries at university were Salvador Luria and Renato Dulbecco, both of whom would go on to receive the Nobel Prize in Physiology or Medicine. Rita graduated in 1936 with a summa cum laude degree in Medicine and Surgery and then enrolled in a three year specialisation in neurology and psychiatry. Her studies, however, were cut short when, in 1938, Mussolini issued his Manifesto of Race which barred non-Aryan Italian citizens from academic and professional careers. This promoted her to go to Belgian where she was a guest at a neurological institute in Brussels until the German invasion in the spring of 1940.

Levi-Montalcini worked briefly as an assistant to the histologist Giuseppe Levi who taught her the technique of silver-staining nerve cells to that they could be seen more clearly under the microscope. Once banned by Mussolini's laws from working in academia, Levi-Montalcini set up a makeshift laboratory in her bedroom where, using scalpels constructed from sewing needles, she conducted experiments with chicken embryos to understand how embyonic nerves grow into a fully developed nervous system. This work was inspired by an article she read by the American embryologist Viktor Hamburger which suggested that limb buds produce an attractive chemical signal. She was assisted in this work by Giuseppe Levi. Towards the end of the War she worked briefly as a volunteer physician for the Allied armies, treating cases of typhoid and other infectious diseases in refugee camps. After the war ended, Levi-Montalcini took up an academic position at the University of Turin and then in 1946 moved to Washington University in St Louis to take up a research position under the supervision of Hamburger. Levi-Montalcini remained at Washington University for thirty years. In 1962 she established a research unit in Rome, dividing her time between there and St Louis. Between 1961 and 1969 Levi-Montalcini directed the Research Center of Neurobiology and the Laboratory of Cellular Biology between 1969 and 1979. In 2002 Levi-Montalcini founded the European Brain Research Institute.

In 1986 Levi-Montalcini shared the Nobel Prize in Physiology of Medicine with her colleague Stanley Cohen for the discovery of nerve growth factor (NGF). The Prize was awarded on the basis of her discovery in 1952 that tumours from mice transpanted into chick embryos induced potent growth of the chick embryo nervous system. She managed with Cohen to purify nerve growth factor and in 1971 published the elusive protein's structure. Subsequently, she showed NGF to be important in the immune system. She was also one of the first to determine the importance of the mast cell in human pathology and identify the endogenous compound palmitoylethanolamide which established as an important modulator of this cell. Her work on palmitoylethanolamide helped lay the foundation for its use as a drug to treat chronic pain and neuroinflammation. In addition to her research, Levi-Montalcini was an ardent champion of scientific training for women.