Rosalind Franklin was an x-ray crystallographer whose work helped uncover the double-helix structure of DNA. 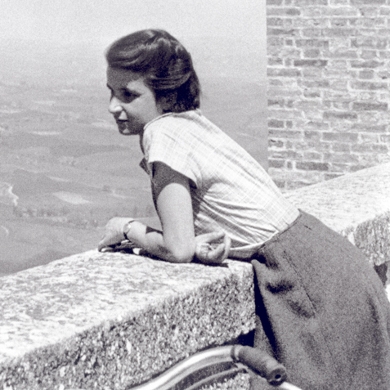 Rosalind Elsie Franklin was the eldest daughter and second of five children born into a wealthy and well-connected Anglo Jewish family. Her father's uncle was Herbert Samuel (later Viscount Samuel) appointed Home Secretary in 1916 and the first practising Jew to serve in the British cabinet, and her aunt, Helen Caroline Franklin was a trade unionist and suffragist married to Norman de Mattos Bentwich, Attorney General of the British Mandate of Palestine. Franklin's mother was Muriel Frances Waley, the daughter of an unsuccessful barrister, Arthur Waley. She greatly regreted not having had the schooling to go to university like her brother and was determined the same should not happen to her daughters. A great deal of her time was devoted to philanthropy, looking after anyone in need, including unmarried mothers, the unemployed, refugees and the elderly. Rosalind's father was Ellis Arthur Franklin. Originally he had intended to study physics at Oxford University, but this was thwarted when he was called up to join the army on the outbreak of the First World War, and then marriage which led him to accept work in the family-based merchant bank, A Keyser & Co. He retained a strong interest in science for the rest of his life and taught a physics class at a Working Men's College where he later became vice principal and bursar. The College named a laboratory in his honour. While, like many of his generation, it he took time to come round to the idea of women with paid careers, he was very proud of Rosalind when she took up place to study science at Cambridge in 1938. When war broke out, however, attempted, without success, to persuade her to abandon her studies to do war work. Rosalind took the view that she would be of more use to the war effort if she completed her chemistry degree. She was backed up on this point by both her mother and her aunt Alice, her father's eldest sister.

As a young child Franklin attended a private school near to home, but then at the age of nine was sent off to Lindores School for Ladies, a boarding school in Bexhill, Sussex, based on the idea that it would help her delicate health because it was near the sea. Two years later she joined St Paul's Girls' School, a day school, where she excelled in science, Latin, and sports. At the time St Paul's was one of the few schools in London where girls were taught science. In 1938 Franklin started studying Natural Sciences at Newnham College, Cambridge, where she majored in physical chemistry. During her studies she shined in chemistry, mathematics, and physics. Her teachers during this time included the spectroscopist W.C. Price and J. D. Bernal, an early pioneer in X-ray crystallography and molecular biology. When Franklin graduated from Cambridge in 1941 women were prohibited from being awarded degrees. Only in 1947, once Cambridge had changed its regulations, did Franklin gain her bachelor's degree. After completing her undergraduate studies Franklin was awarded a research scholarship to do doctoral research under Ronald Norrish, a future Nobel Prize winner, but she relinquished this after a year to contribute to the war effort at the British Coal Utilization Research Association (BCURA). In 1945 Franklin completed her doctoral research based on the work she had undertaken at the BCURA.

After completing her undergraduate degree, Franklin first spent a year working as a researcher in R.G.W. Norrish's laboratory and then as Assistant Research Officer at the BCURA where she studied the properties of coal and graphite. After the War, based on an introduction made by Adrienne Weill, her former Newham tutor, Franklin gained an appointment with Jacques Mering at the Laboratoire Central des Services Chimiques de l'Etat in Paris. An expert in crystallographer and the application of X-ray diffraction to the study of rayon and other amorphous substances, Mering taught Franklin X-ray crystallography, which she applied to researching coal. In 1951, Franklin joined the Biophysics Unit at King's College London as a research associate, where, aided by Raymond Gosling, she conducted work on the x-ray crystallography of DNA fibres. Franklin's work in this area was initiated by John Randall, director of the Biophysics Unit, and was done separately from that of Maurice Wilkins with whom she did not share an easy working relationship but who was also working on the structure of DNA. In 1953 Franklin was recruited by her former tutor Bernal, to Birkbeck College, where she applied x-crystallography to studying the structure of the tobacco mosaic virus and the structure of RNA. Her work in this area, however, was cut short, when aged just 38 years old she died of ovarian cancer. Some commentators attribute Franklin's cancer to the x-ray radiation she had been exposed to during her work.

Franklin was instrumental to discovering there were two forms of DNA. When wet, DNA fibres became long and thin, called the B form, and when dried it became short and fat, labelled the A form. In 1951 Franklin presented this information in a lecture in Cambridge where James Watson was present. Importantly Franklin indicated that DNA was likely to be a double helix with anti parallel strands and that it had a phosphate backbone on the outside. Within this context the double bases of DNA, the code for inheritance, was envisaged to be on the inside of the helix. Franklin's notable achievement was the x-ray photographs she took of DNA, which Bernal, her former teacher, claimed were 'amongst the most beautiful x-ray photos of any substance ever taken.' Franklin's photograph, labelled 51, taken of B-DNA in 1952, was the first proof of the double helical structure of DNA. This photograph provided critical data for Crick and Watson's building of their DNA double helix model.