Together with Francis Crick, Watson was co-discoverer of the double-helix structure of DNA. This they accomplished with the help of earlier research by Rosalind Franklin and Maurice Wilkins. 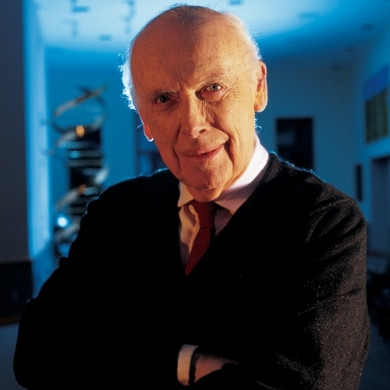 The son of American parents with English, Scottish and Irish roots, James Watson was born in Chicago. One of two children, Watson shared a passion for bird watching with his father, who was a tax-collector. Originally interested in becoming an ornothologist, in 1946 he shifted his ambition to studying genetics when he read Erwin Schrodinger's book 'What Is Life?'. In 1968 he married Elizabeth Lewis with whom he had two sons, one of whom developed schizophrenia. His son's disease awakened Watson's interest in understanding the genetics behind the disease.

As a child Watson attended Horace Mann Grammar School and then South Shore High School. When 15 years old he went to the University of Chicago, graduating with a degree in zoology. In 1947 Watson began a doctorate in zoology at Indiana University, where he worked on bacteriophages, viruses that invade bacteria in order to reproduce, as part of research to understand the nature of genetic mutation. Completing his PhD in 1950, Watson then spent a postdoctoral year at Copenhagen University where he continued his study of viruses and started remedying his ignorance of chemistry.

In 1951 Watson joined the Medical Research Council Unit at Cavendish Laboratories in Cambridge where several important X-ray crystallographic projects were in progress. Soon he was collaborating with Francis Crick to unravel the structure of DNA. From 1956 he took up several positions at Harvard University and in 1968 became director of the Cold Spring Harbor Laboratory (CSHL), helping it become a leading insitution in genetic research. Between 1988 and 1992 Watson headed the National Center for Human Genome Research at the National Institutes of Health and then returned to CSHL, from which he retired in 2007.

Watson is most strongly associated with the determination of the structure of DNA as a double helix, which he published with Crick in 1953. Awarded a Nobel Prize for this work alongside Crick and Maurice Wilkins, this research opened up a new understanding of biology and genetics, laying the foundation for the development of recombinant DNA which helped spawn the new biotechnology industry in the 1970s. Under his watch Cold Spring Habour Laboratory became a leading research centre, not only helping to uncover the molecular nature of cancer but identify cancer genes for the first time.

Watson is a molecular biologist and geneticist who helped to determine the double-helix structure of DNA in 1953, for which he shared the 1962 Nobel Prize for Nobel Prize for Medicine. Watson also helped set up the Human Genome Project, which he headed up between 1990 to 1992. He left the project after campaigning against the NIH patenting the human genome. In 2007 he became the second person to publish his fully sequenced genome online. This he did to encourage the development of personalised medicine. 1928-04-06T00:00:00+0000James D Watson was born in Chicago, IL, USANature published Crick and Watson's letter on Molecular Structure of Nucleic Acids: A Structure for DNA in which they described a double helix structure.1953-04-02T00:00:00+0000Nature published Crick and Watson's letter on Molecular Structure of Nucleic AcidsOne paper, published by Rosalind Franklin with her PhD student Ray Gosling, included an image produced with x-ray crystallogaphy, which showed DNA to have regularly repeating helical structure. Known as photograph 51, this image had been previously been shown by Maurice Wilkins, without Franklin's permission, to James Watson, who, together with Francis Crick, used it to develop their double-helix model of DNA which was also published in Nature. Calculations from the photograph provided crucial parameters for the size of the helix and its structure, all of which were critical for Watson and Crick's molecular modelling work. Crick and Watson depicted DNA as having a double helix in which A always pairs with T, and C always with G. Their final model represented a correction of an earlier model in the light of comments made by Franklin that the hydrophilic backbones should not go at the centre of the molecule, as Watson and Crick had originally assumed, but go on the outside of the molecule where they could interact with water. The three papers were published in Nature, 171 (25 April 1953), 737-41.1953-04-25T00:00:00+0000Nature published three papers showing the molecular structure of DNA to be a double helixThe award was given to James Watson, Francis Crick and Maurice Wilkins. The work of these individuals was built upon that of Rosalind Franklin who died before the Nobel Prize was awarded. 1962-10-18T00:00:00+0000Nobel Prize for Physiology or Medicine awarded for determining the structure of DNAThe prize was awarded to James Watson, Francis Crick and Maurice Wilkins who helped to show that the DNA molecule consists of two strands that wind round each other like a twisted ladder. They argued that each strand contains a backbone made up of alternating groups of sugar (deoxyribose) and phosphate groups and that each sugar had an attached one of four nucelotide bases: adenine (A), cytosine (C), guanine (G), or thymine (T). Much of this work rested on the work of Rosalind Franklin and and her student Ray Gosling. Franklin died before the Nobel Prize was awarded. 1962-10-19T00:00:00+0000Nobel Prize awarded for uncovering the structure of DNABiologists gathered at Cold Spring Harbor Laboratory laid out the first plans for mapping and sequencing the human genome. Among those attending were Walter Gilbert, James Watson and Paul Berg. Many scientists were highly sceptical that such a project was feasible because of the large size of the genome and the time and costs involved. Up to this point scientists had only managed to sequence some viral DNAs which had 100,000 DNA base pairs. The human genome was 10,000 bigger in size. 1986-04-30T00:00:00+0000Plans for sequencing human genome first laid out